" Amidst the tens of thousands of names of monarchs that crowds the columns of history...the name of Ashoka shines, and shines almost alone, a star." ~ H.G. Wells.


Emperor Ashoka, the third samrat of Mauryan dynasty is regarded as one of the most exemplary monarchs in history. The meaning of Ashoka in sanskrit is " without sorrow." He was also referred as Samraat Chakravartin which means " emperor of emperors", Devanampriya ( the beloved of god ), Priyadarsin ( he who regards everyone with affection ). In the beginning of his life as a king, Ashoka acquired a bad name with his cruelity and painful, merciless punishments. He was called " Chanda Ashoka" which means " Ashoka the cruel." He ruled almost entire Indian subcontinent. He is credited for spreading Buddhism in many parts of the world. He grew up as a fearless king with a vision to expand his empire continuously, which stretched across the Indian subcontinent leaving aside the southern most parts of Tamilnadu and Kerala. His grandfather Chandragupta maurya ruled for 24 years, his father Bindusara ruled for 25 years. Ashoka alone ruled for a large period of nearly 40 years. This article is referred from epics such as Ashokavadana, Mahavamsa, Divyavadana. Ashoka had five wives. The first one was Maharani Devi, the second one was Rani Kaurwaki or Karuvaki or Charuwaki, the third one was Rani Padmavati, the fourth was Asandhimitra who was his chief queen and fifth wife was Tishyaraksha. 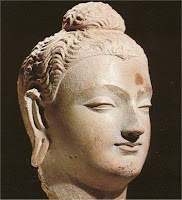 Ashoka was born around 304 B.C. (1452 BCE as per new translations), in Pataliputra ( present day Patna) to second emperor of Mauryan dynasty, Bindusara and Maharani Dharma or Subhadrangi. Dharma was the daughter of a poor Brahmin priest from the kingdom of Champa, Once poor Brahmin priest brought his daughter Dharma to Pataliputra to marry Samraat Bindusara. She was fair and very beautiful. Bindusara introduced her in his women's palace, and all his other wives became jealous of her and her beauty. The other queens made her a barber girl. However, she surprised King with her service. Then the king asked Dharma to make a wish and he would fulfill that. Then Dharma or Subhadrangi wished that she want to be mother of Bindusara's son. This was when Ashoka was born ending all the sorrows of Subhadrangi. She named him Ashoka as his birth ended her sorrows, Ashoka means " end of sorrows " in sanskrit.

As his mother was assigned a relatively low position in the royal household, Ashoka also recieved a low position among the princes. He had only one younger sibling named Vitashoka, but 6 elder half-brothers. Right from his childhood, Ashoka showed great talent in the field of weaponry skills as well as academics. Bindusra, impressed with Ashoka's skill and knowledge, appointed him as Governor of Avanti. Here he met and married his first wife Devi, the daughter of a tradesman from Vidisha. Ashoka and Devi had two children, son Mahendra and daughter Sanghamitra. However, Devi never went to Pataliputra when Ashoka was called back in the capital. This was probably because she was unfit to become a royal queen as she was daughter of a merchant. So, she never became his chief queen. So although Devi was his first wife, his other wife, Asandhimitra ( daughter of a king ) became his chief queen. Mahendra and Sanghamitra later went on to spread Buddhism and became famous buddhist monks.

Ashoka was not a good looking boy. Bindusara did not like Ashoka and he wanted his favourite son Sushima to become next king of Mauryan dynasty. Sushima had huge problems with Ashoka for the mere reason that Ashoka was much more efficient and courageous than him. So he did not leave any chance to create problems in ashoka's life.

Sushima managed to convince his father to send Ashoka to Taxila (in modern day Pakisthan) to supress a revolt.Sushima's plan bakfired as Ashoka supressed the revolt with out any bloodshed and more over he was very much liked by the people of Taxila for his behaviour.

Sushima then began inciting Bindusara against Ashoka, which resulted in Ashoka being sent in to exile for two years. Ashoka went to Kalinga during his exile period, there he met a fisherwoman named Kaurwaki. He fell in love with her and later, made her his second or third wife.

Soon a violent uprising started in Ujjain. This forced Bindusara to call Ashoka back and he subsequently sent Ashoka to suppress that revolt. whilst Ashoka was succeeded in crushing the uprising, he was injured in a battle. He was secretly treated by some Buddhist monks and scholars believe that this was Ashoka's first encounter with the teachings of Buddha.

In the year 275 B.C (1472 BCE new translations)., Bindusara fell ill and died. A war of succession was fought between his half-brothers and Ashoka. In this war Ashoka killed all his 6 half-brothers, mainly Sushima and his supporting siblings. Thus Ashoka became the third ruler of Mauryan dynasty after Bindusara. This topic of clashes between Ashoka and his half-brothers is also mentioned in our article Bindusara Amitraghata.

He spared Vitashoka and made him viceroy of a small state. Ashoka's coronation took place four years after his ascent to throne. 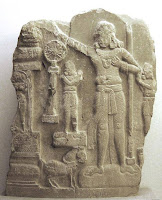 Buddhist literatures describe Ashoka as a cruel, ruthless and bad-tempered ruler. He was named "Chanda Ashoka" which means "Ashoka the cruel." He built a chamber called "Ashoka's Hell", a torture chamber manned by an executioner to punish offenders. Ashoka wanted a exact replica of Hell and hell like punishments to be executed in Ashokas hell. Ashoka made it clear that no prisoner should leave the Chamber alive. The prisoners were tortured in different ways and killed.

Ashoka launched brutal assaults to expand his empire, which lasted for around eight years. Although the Mauryan empire he inherited was huge in size, he wanted to expand his borders. Thus his kingdom stretched from Iran-Afghanisthan borders in the west to Burma in the east. He annexed whole of southern India except Ceylon ( Srilanka ). The only kingdom left for him to conquer was Klinga ( present day Orissa ).

Kalinga war- One of the bloodiest wars ever:

Ashoka was determined to conquer Kalinga and annex in his kingdom. A war was fought between Ashoka and Raja Anantha Padmanabhan of Kalinga, in which Ashoka was victorius but the war losses changed the mind of Ashoka. Ashoka's own inscriptions tells us that a 100,000 died in the war and even a large number died from wounds and hunger. A further 1,50,000 were taken away as captives. According to official narrative, Ashoka was horrified by his own brutality and became a Buddhist and a pacifist. But many historians strongly claim that Ashoka played a game just to frame himself as a Peace seeker infront of coming generations. He used his inscriptions as a tool to counter his reputation for cruelty. These inscriptions of regret were placed far away from Kalinga or Orissa. They argue that, if Ashoka was genuinely remorseful, he would have apologize the people whom he gave pain. He would have placed inscriptions of regret in Kalinga but he did not do that. This creates doubts on whether Ashoka was really regretfull for his act. What ever the truth may be, the losses of Kalinga war were huge and a detailed and interesting information was written in our previous article The Kalinga War.

By witnessing the flashes of destruction that his conquest had wrought even after returning to Pataliputra. He experienced an utter crisis of faith during this period and sought penance for his past deeds. He vowed never to practise violence again and devoted himself completely to Buddhism. According to above mentiioned scripts, Kalinga war changed Ashoka.

The administration of Ashoka after Kalinga war and his transformation, was focused solely on the well-being of his subjects. He adopted a paternalistic view on administration and proclaimed " All men are my children", as evident from his edicts. 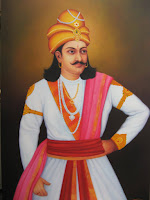 Although Ashoka built his empire on the principles of non-violence, he followed the instructions outlined in Arthashastra, for the characters of the perfect king.According to Buddhist sources, he was so influenced by the teachings of Buddhism, that he made Buddhism a state religion. He issued a series of edicts that laid down the basic rules for formulating policies in empire.

He is said to have built 84,000 stupas to store the relics of Buddha and also places of meditation, across south asiaa and central asia for Buddhist monks.

His "Ashoka Chakra", or "the wheel of righteousness", widely inscribed on many relics of the Mauryan emperor, was later adopted in to Indian National Flag. He administered the construction of a sculptue of four lions standing back to back , known as lion capital of Ashoka, atop thhe Ashoka pillar at Sarnath. It is national emblem of India.

Even though he practised Buddhism and motivated his people to follow Buddhism, he permitted the practise of other religions as well.

Ashoka died around 232 B.C (1436 BCE as pe new translations). Legend states that during his cremation, his body burned for seven days and nights. He ruled for almost 40 years. Buddhism, during his rule attained great heights in spreading but after Ashoka's death, it lost importance in Indian sub continent. After 50 years of his death, the Mauryan empire came to an end.