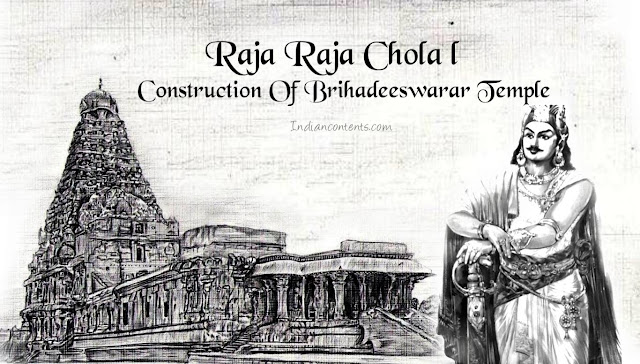 Raja Raja Chola I is considered as one of the greatest ever Indian kings and possibly the greatest leader of Chola dynasty. He turned a small kingdom into one of the dominant empires in south India. He constructed the world famous temple which was declared by UNESCO as world heritage site called Brihadeeswarar temple. He was from a dynasty which saw ruling of great kings like Karikala Chola, Vijayalaya Chola, Aditya Chola I etc,. He ruled between 985 and 1014 A.D. He laid the foundation for the growth of the Chola kingdom into a mighty empire by conquering the kingdoms of southern India and he expanded the Chola empire to as far as Sri Lanka in the south and Kalinga (Orissa) in the northeast. He fought many battles with Chalukyas in the north and Pandyas in the south. He was a fierce warrior, a brilliant architect and a great philanthropist.

Raja Raja Chola I was born as Arulmozhi Varman to Parantaka II and Vanavan Mahadevi (Velir Malayaman dynasty) in 947 in Aipassi month on the day of Sadhayam star.  He was also known as Raja Raja Sivapada Sekhara, Telungana Kula Kala, Ponniyin Selvan, Rajakesari Varman, Raja Raja Devar and respectfully as Peruvudaiyar. He was the third and younger child of Parantaka II. He had one elder brother and elder sister. Aditya Karikalan or Aditya II was his elder brother who was cruelly assassinated. Kundavai was his elder sister. As per records and inscriptions, he had nearly 15 wives. Among them Vaanathi or Thiripuvana Madeviyar (princess of Kodumbalur) bore him his only son Rajendra Chola I.

The Thiruvalangadu copper plate inscriptions mentions that Raja Raja Chola I invaded the Sinhalese country (sri lanka). The king of Sinhalese at that time was Mahinda V. In this battle Raja Raja I destroyed the 1400 year old capital of Sinhalese called Anuradhapura. Raja Raja I selected the city Polonnaruwa as capital city. He changed its name to Jananathamangalam. He built a Shiva temple in that city. He captured only northern part of Sri Lanka. The other half was captured by his son Rajendra Chola after him.

Wars With Eastern And Western Chalukyas :
During the reign of Raja Raja I, Hoysalas were vassals of Western Chalukyas. An inscription from Gopalakrishna temple in Narasipur mentions that a chola general killed minister Naganna and other generals of Hoysalas. This was a indirect victory of Cholas over Western Chalukyas.

Around 998-999 A.D. Raja Raja conquered Gangapadi (Gangawadi), Nurambapadi (Nolambawadi) which formed part of present day Karnataka. The invasion of Chola country by RajaRaja I proved a complete success and the entire Ganga country came under the Chola rule for the next century. 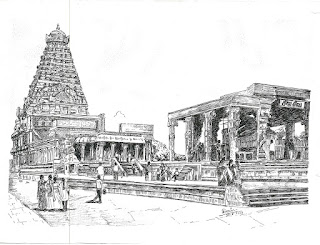 One of the greatest and largest temples of India was Brihadeeswarar temple which was dedicated to Lord Shiva. This temple is a part of UNESCO World Heritage Site. The temple is an example of Dravidian architecture. It is located in Thanjavur of Tamilnadu. The foundations for this temple were laid around 1002 A.D. This great temple was built by RajaRaja Chola of Chola dynasty. It was completed in 1010 A.D. In 2010, the temple turned 1000 years old.

The temple tower (Vimanam) is 198 ft. high and is one of the tallest in the world. The apex on the top of the temple (Kumbam) weighs around 80 tons. The entire temple is made out of granite. This temple is an expression of Cholas wealth, power and artistic expertise.

RajaRaja Chola was a king who documented almost his entire life on stone inscriptions and copper plates but no information is available about his death. His tombstone is now in small village of Udayalur. This is where he is rumored to have been buried or cremated. There is a Shiva lingam on top of it about 2 feet tall. Why would a great king like Raja Raja Chola I have such a small and simple grave ?

Several archeologists state that the only reason why a king's death would not be recorded is if the king died an unnatural death. According to this, if a king committed suicide or was murdered, then the ancient Tamils would not record that. This might be the correct answer for the question of how RajaRaja died. But yet it is not proved so it still is a guess. Raja Raja Chola I died around 1014 A.D  He was succeeded by his son Rajendra Chola I.