Mahapadma Nanda was born to a Shudra mother. He belonged to Barber caste of Hindu religion. As he belonged to lower caste Shudra, he destroyed all the Kshatriyas and gained the title "Destroyer of Kshatriyas". He was the founder of Nanda dynasty. He had nine sons of which one was illegitimate. They are Pandhukananda, Panghupatinanda, Bhutapalananda, Rashtrapalananda, Govishanakananda, Dashasidkhakananda, Kaivartananda, Karvinathananda ( illegitimate son), Dhanananda ( Successor of Mahapadmananda ) also referred as Agrammes, Xandrammes by Greek historian Diodorus.

Mahapadma Nanda was born (Claification needed about the year) to the king of the Shishunaga dynasty, Mahanandin, and to a Shudra women. So he was the first Shudra king of Magadha. His father Mahanandin was the last ruler of the Shishunaga dynasty. In childhood, Mahapadma Nanda was insulted greatly by the son's of other wives of Mahanandin as he was a shudra. He developed a hatred towards Kshatriyas with that insult and later went on win the title "Destroyer of Kshatriyas", as he killed all the Kshatriyas later. 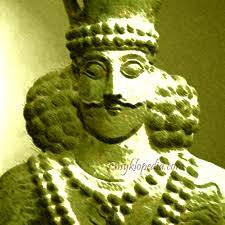 After the death of his father Mahanandin, Mahapadma Nanda wanted to claim the throne. But he had to face the opposition from the son's of other wives of Mahanandin. So he usurped the kingdom by killing each of the other son's of Mahanandin. He named his dynasty as Nanda dynasty. He made Pataliputra ( Patna,Bihar ) as the capital of his kingdom.

As we discussed above, he was referred in Puranas as "Destroyer of Kshatriyas", because he went on destroying all the Kshatriyas and their kingdoms. He defeated the kingdoms of Kurus, Panchalas, Maithilas, Aikshvakus, Asmaka ,Kalinga and the Surasenas. During the peak of its glory, the Nanda dynasty stretched from Punjab in the west to Bengal in the east and to the Vindya mountains in the south. Mahapadma Nanda established the first great North Indian empire having its power center in Magadha. He vanquished the old dynasties of the North and annexed them in to his kingdom. Because of religious hate, the vedic philosophers of his time referred his rise as the beginning of Kali yuga as he was a Shudra. He had a strong administrative system and he appointed officials to collect taxes. Their treasury was continuously supplemented by collecting taxes and well planned economic activities. The wealth of Nanda kingdom under his rule increased tremendously. Agricultural infrastructure was developed in a big way. This also very much boosted the economy of the kingdom.


This made their subjects prosperous in all fields. The people enjoyed properous life with out any fear of out side invaders. Even Alexander The Great not dared to cross the present day Beas river to intrude in to Nanda kingdom when he heard of the military might stories of Nanda kingdom from natives. As the Alexander failed to defeat the Great Indian king Purushothama and the army of Alexander heard about even mightier Nanda King's army, they refused to cross Beas river. 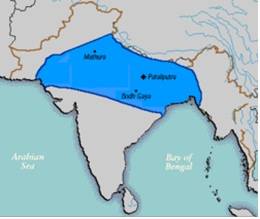 Mahapadma Nanda army consisted of 2,00,000 infantry, 20,000 cavalry, 3,000 war elephants, and 2,000 war chariots at the lowest estimates. Because of this huge military structure no intruder dared to even think of attacking Mahapadma Nanda. The replenished treasury gave way to increase in strength of the army. His kingdom was the wealthiest among all those at that time.

During his rule people enjoyed freedom of following the religion of their faith with out any fear. The people followed Jainism, Hinduism and Buddhism. But the rulers of Nanda empire embraced Jainism. His rule encouraged arts and literature. Panini, the eminent linguist, was born during this era. He founded Nanda dynasty in 345 BCE as per old translations (1634 BCE as per recent translations)

The constant research is  going to get clarity about the ruling years of Mahapadma Nanda(will be updated soon). The Vaayu Purana assigns 28 years to Mahapadma Nanda's reign. The Mahapadma Nanda shall be long remembered as a great ruler of ancient India, during whose rule his subjects enjoyed the life benifits with out any fear of out side intruders. He gave respect to other religions and gave people freedom of following the religion of their faith.