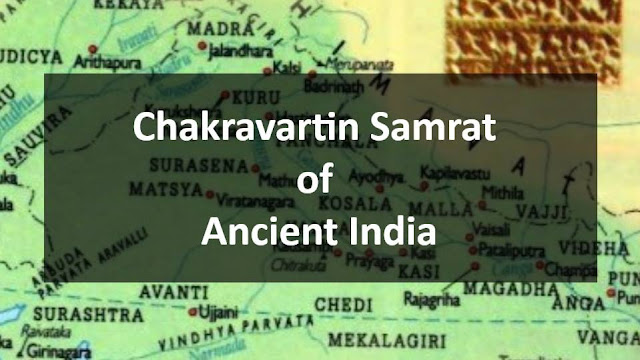 According to the titles given to the rulers, there are three distinct categories-
Raja ( King )
Maharaja ( Emperor)
Chakravartin Samrat ( Monarch )
A Raja or king is like a ruler of a small kingdom, generally chieftain of a tribe or community. A Maharaja or an emperor is the ruler of a large kingdom, significant enough to influence the politics of the area. And finally, a Samrat is the one who rules the entire or major part of Bharatvarsh and has others under his sway.

A typical way of going up the ladder was either by performing Ashwamedha or Rajasuya Yagyas or physically capturing the territories. Ashwamedha was a famous practice in ancient India. Rajasuya Yagya isn't heard of much.

( For interesting read, Vayu Puran 57.68-80 gives the qualities of a Samrat )
A Samrat is an ideal ruler who is considered to be the epitome of justice and power. He has a specific term given to him- Sarvabhauma or who has all land (Bhumi) under his sway or Bahuvruhi or whose chariot has no obstruction of moving anywhere. 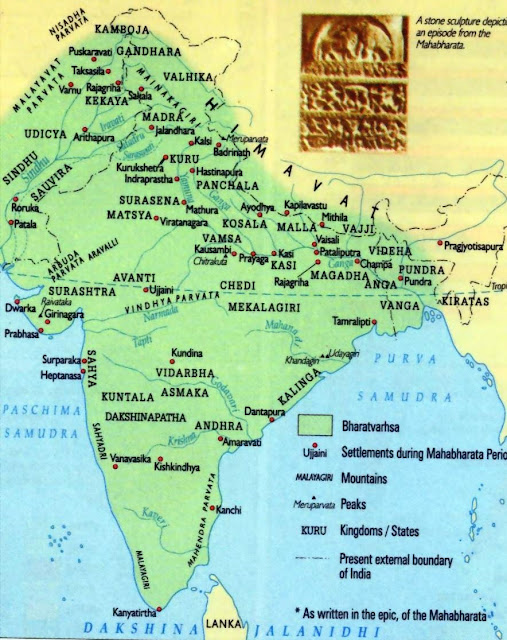 A map of ancient India is given which will make it easy to visualize the geography of the kingdoms.
The list varies a bit in other sources but more or less, this is the actual list.
A few extra kings that could have been Samrats are Ajamidha Vaikuntha of Purus, Kartavirya Arjun of Haiheyas (Yadavas).

Now I am tempted to write something about those Samrats mentioned above-
Bharata Daushyanti is the person on whom this land is called Bharat varsh. In absolute terms, his is the 32nd generation after Vaivasvata Manu from whom majority of the kingdoms descended. While I talk of other kings, I will tell their place with respect to Bharata. His kingdom is Kurujangala (Haryana)

Marutta Avikshita had conducted a historical Yagya of magnificent size where Samvarta Angiras had conducted the Yagya. He was about 2 generations prior to king Bharata. His kingdom is Vaishali (north Bihar)
Suhotra Atithina is also a composer in Rigveda and belongs to the Bharadvaja group of composers. Atithina is a corruption of Vidathina, another name of Bharadvaja Barhaspatya. He is almost 5 generations after Bharata. His kingdom is same as Bharata.
Brihadratha Anga belongs to the Anga kingdom and is 3-4 generations after Bharata. His kingdom is Anga (Bengal)
Shivi Aushinara belongs to the Anu group who ruled the 5 rivers of Punjab in today's Pakistan.
Yayati Nahusha is almost 27 generations before Bharata. He was the guy who ruled almost all of north India. Puru, Yadu, Turvasu, Druhyu and Anu were his 5 sons from whom the major kingdoms of north India sprung. So you can imagine the area he ruled.
Shashabindu Chaitrarathi is a Yadava whose daughter Bindumati was the wife of Mandhata Yuvanashva, another Samrat from Ayodhya. Shashabindu's kingdom was around Gujarat and Rajasthan. He is almost 11 generations before Bharata.
Gaya Amurtarayas belonged to the Kanyakubja kingdom (of whose Vishwamitra was the king before becoming a rishi). This kingdom is near Kannauj.
Rantideva Sankruti ruled around the Chambal river in Rajasthan and MP,called Charmanvati then. He was famous for his ability to share his belongings. Sankruti is an Angiras gotra among brahmins.
Prithu Vainya is a very ancient king, even before Vaivasvata Manu, almost 44 generations before Bharata. He was the one who captured the Earth and made it productive. His father Vena was one of the cruelest king of India and was the composer of the Nasadiya Sukta in Rigveda. Because Prithu was the first ever king of the whole Earth, the Earth got her Sanskrit name from him, Prithu ---> Prithvi
Now talking of all Suryavanshi kings from Ayodhya. First let's arrange them chronologically.
Ambarisha Nabhagi , Mandhata Yauvanashva, Sagara Aikshvaku, Bhagiratha Dileepa, Dileepa Khatvanga and Ram Dasharathi. All these ruled at Ayodhya in UP. This family line itself has maximum Samrats. Ambarisha Nabhagi is son of Nabhag who is the son of Vaivasvata Manu and not of Nabhaga who was another king of Ayodhya. Out of these, Mandhata and Ambarisha are composers in Rigveda.