Rajaram Raje Bhosale was the younger son of Maratha king Shivaji. He was the king who had to face a bad time in facing the dominant Mughal rule which has become very stronger in the leadership of Aurangazeb. He became king at an early age of 19 due to the death of his brother Sambhaji Maharaj, by Aurangazeb.

Rajaram Chhatrapati was born on february 24,1670, at Rajgad fort. He was born to second wife of Shivaji Maharaj. His mother's name was Soyrabai. Rajaram lacked the qualities of his father. He possessed neither the initiative nor the dash of Shivaji Maharaj.His father Shivaji Maharaj died when he was only 10 years old. After his father's death he was arrested and put in jail by his brother Sambhaji to capture the throne. Due to this, Rajaram failed to get education as he was put in jail which was necessary for his status.

Aurangazeb wanted to kill Rajaram too and annex Maratha kingdom into his rule. Yesubai suggested that Rajaram should fight his way out to different strongholds, in which the Jinji fort was the certain one, which was now located in Villupuram district of Tamilnadu, India. The Maratha Army fought with the Mughals ensuring safe escape of Rajaram to Jinji fort.Aurangazeb wanted to attack and kill Rajaram on the way of his escape to Jinji fort.


Here we have to discuss a small detail about why Rajaram wanted to reach Jinji fort? the reason is simple. It is the only secured fort which can withstand any attack made on it and no attacker can go inside the fort. Such is the strength of the fort. This was the reason Aurangazeb wanted to kill Rajaram before he reach the fort. The mughals blocked all the possible ways from Raigad to Jinji fort. Rajaram disguised Mughal army by reaching Jinji in a different way. He travelled through Keladi and sought refuge from Keladi Chennamma who was very well known for her bravery and a strong desire to put an end to Mughal expansion. So she readily helped Rajaram for a safe passage through her kingdom. Atlast Rajaram reached Jinji fort on november 1st,1689. 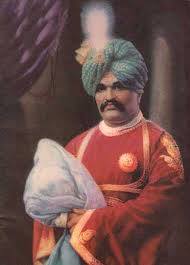 Aurangazeb deputed Ghazi - Ud - Din Firoze Jung against Marathas in the Deccan. And he specially sent Zulfiqar khan Nusrat Jung to capture and sieze Jinji fort by killing Rajaram. Zulfiqar starting from 1690 tried close to eight years to breach Jinji fort. Atlast he siezed Jinji fort on january 8, 1698. By that time Rajaram Chhatrapati escaped and fled to Vellore and further to Vishalgarh to fight Mughals.

Death:
Rajaram Chhatrapati died of a lung disease on March 2nd, 1700 at Sinhagad near Pune in Maharashtra. One of Rajaram's widow, Tarabai proclaimed her young son, Shivaji II,as Chhatrapati.