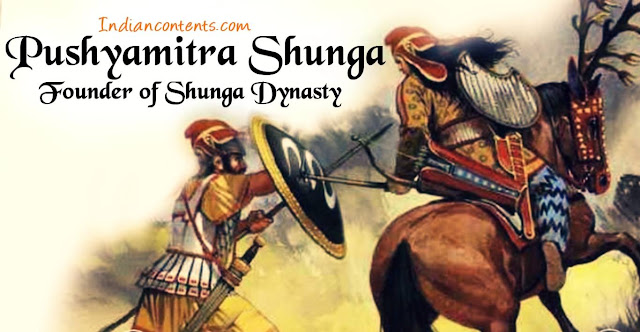 Pushyamitra Shunga or Pushyamitra Sunga was the founder of Shunga dynasty and he was the man who ended the Mauryan dynasty. He ruled between 185 B.C.E to 149 B.C.E (1218 to 1158 BCE as per new translations) . He was an army commander under the rule of last mauryan ruler Brihadratha Maurya. Then how a commander turned into a king? History always astonishes us by some dramatic episodes like this. The great Mauryan empire which saw great rulers like Chandragupta Maurya, Bindusara and Ashoka was later captured by an army commander. Let us see how did that happen.

After the rule of Ashoka, all the other kings of Mauryan empire failed to stop the disintegration of kingdom and this resulted in the downfall of Mauryan empire. The last ruler of Mauryan empire, Brihadratha Maurya was not an effective ruler as Ashoka. During his rule, various sub-kingdoms like Ashmaka ( Maharashtra ), Kalinga ( Orissa ), Madra, Kekaya, Gandhar ( now in Pakisthan ), declared independence from Magadha empire. On top of that, the Mauryan kings ruling Pataliputra ( Patna, Bihar ), were supporting and appeasing Buddhism while neglecting the age old vedic life style or Sanathana dharma ( Hinduism ). This infuriated the people favouring old vedic life style who were majority in terms of population.All this resulted in a dramatic and shocking event during the reign of Brihadratha, the last Mauryan king in 185 B.C.E.

Pushyamitra Shunga was the army commander of Brihadratha's army. He was a brahmin and a strong follower of vedic life style. He was extremely unhappy with the way Brihadratha was running the kingdom. He was also not happy with the appeasement policy towards buddhism. The appeasement and inaction of Mauryans not only led to independence of provinces listed above but also led to attacks from foreign invaders.

The Macedonians ( Indo-Greeks ), who were vanquished by Chandragupta Maurya and who never dared to enter Indian subcontinent during the reign of Ashoka, attacked and captured a large portion of North Western region. It is said that Menander-I, also known as Milind, was ruling Sakala ( Sialkot ) at that time.

Frustrated by the spiritless attitude of Brihadratha towards foreign invasions, decline of vedic culture and supporting buddhism over vedic culture, Pushyamitra and his army believed that Brihadratha was not fit to rule. With a extreme anger, one day Pushyamitra Shunga was conducting an army parade in front of the king and suddenly killed the king there.This was the arrival of Regicide in Indian history. After killing the last Mauryan empire, Pushyamitra Shunga declared himself as the king and established the Shunga empire. He was supported by the army.

Pushyamitra Shunga often portrayed as villain in some buddhist texts as he intentionally destroyed many stupas and monasteries because of his hatred towards buddhism. Some buddhist texts like Ashokavadana and Divyavadana describes him as a king who opposed Buddhism. It was said that he tried to destroy the famous buddhist monastery at Kukkutarama which was built by emperor Ashoka near Pataliputra but failed to do so because of some supernatural forces says buddhist scripts. He then proceeded to Shakala ( Present day Sialkot, Pakisthan ), where he offered a prize of 100 Dinaras or gold coins for each head of buddhist monk brought to him.Taranatha, the famous Tibbetan author, also mentioned some of the activities of Pushyamitra against Buddhism. 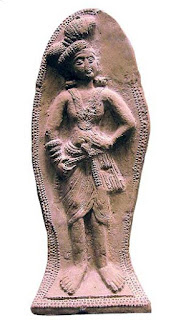 But there are some other Buddhist and non-buddhist scripts which state that Pushyamitra was not against buddhism. According to Ashokavadana, he offered 100 Dinaras for heads of buddhist monks, but the Dinara did not come into use before 1st century C.E. in India. The Srilankan buddhist text, Mahavamsa suggests that monasteries in present day Bihar, Awadh and Malwa during the rule of Pushyamitra's contemporary Dutthagamani ruled in Lanka. This suggests that these monasteries survived Pushyamitra's reign. There are also evidences that Barhut stupa was built during Shunga empire rule. There are evidences that during his rule people made big donations to buddhist monasteries without any fear.

It is possible that the buddhist followers and monks were habituated to extreme support and encouragement from Mauryan emperors and those were not given to them by Pushyamitra Shunga and started to frame him as a Anti-buddhist. The buddhist monasteries and institutions stopped receiving royal patronage as in the rule of Mauryans. Pushyamitra Shunga, after becoming king, conducted Ashwamedha Yagya ( Sacrificing Horses to Gods ), a vedic ritual to extend the boundaries of the kingdom through the might of arms. He supported Brahmins and vedic life style but did not opposed buddhism instead stopped giving royal patronage to them which was going on from Mauryan rule. This change might have led to discontent among Buddhist followers and monks, resulting in exaggerated accounts of persecution of buddhism by Pushyamitra Shunga.

Contribution of Cultural and Literary growth:

Shunga empire did contribute a lot in the cultural and literary growth of our India. The third and most famous commentary on compilation of grammatical rules of Sanskrit language which was written by  an ancient acharya named Panini, was done by an acharya known as Patanjali during Shunga's rule. This work was called as " Mahabhashya ".

Patanjali wrote the famous Yoga sutra which is still followed all over the world. The teachers and Brahmins were recognised for their intellectual qualities. Gurukula style of education continued. Patanjali also refers to the guilds of five types of artisans - metal workers, masons, architects, cooks and confectioners. Trade  and farming were conducted in an organised way. There was prosperity all around during Shunga rule.

The highlight of Shunga art was construction of railings and Toranas ( Gateways ), for Sanchi and Vidisa stupas. This proves that though the rulers were followers of Vedic Dharma, they patronized all other religions. Besides these, the artistic activity kept flourishing in Madhura and Bodhgaya.