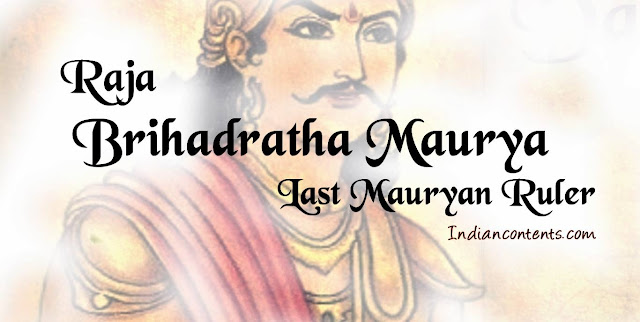 The last ruler who ruled Mauryan empire was Brihadratha Maurya, and he was the king who witnessed the downfall of Mauryan empire which was founded  by great king Chandragupta Maurya and ruled by some great kings like Bindusara and Ashoka the king. According to Puranas, Brihadratha succeeded Shatadhanvan Maurya and ruled for seven years. He ruled between 187 B.C.E - 180 B.C.


Although it was a fact that after the rule of Ashoka the king, the size of kingdom reduced after each next succession of mauryan kings, Brihadratha Maurya had a vast empire. His kingdom extended from Jalandhar in North India to the river Narmada in South.


The death of Brihadratha was dramatic and aghast. He was killed brutally by his own commander in-chief or Senapathi Pushyamitra Shunga or Sunga. One day pushyamitra Shunga invited his king Brihadratha Maurya to check an army parade. There he killed Brihadratha in front of the army and people. The reason for his killing was said to be failure of the king to fulfill his promises to maintain peace in the kingdom and protection from foreign invasions.

The assassination of Brihadratha was a rarest of scene which we get to see in history, where a king was killed by his army commander. After the death of the king, Pushyamitra Shunga took over the throne and declared himself as king and founded Shunga dynasty. This took place around 180 B.C.E.


This was the end of one of the great dynasties of India called Mauryan dynasty. Thus the last ruler of Mauryan empire was succeeded by Pushyamitra Shunga.